Daniel Lyon first joined us in 2017, two years after an incident where he was the lone firefighter from his engine to survive one of the largest fires in Washington State, which spread over 400,000 acres. Daniel was just 24 years old when he was severely burned; he was working part time as both a police officer and a U.S. Forest Service Wildland Firefighter. 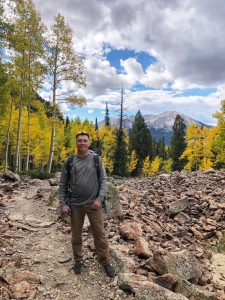 “When I first came to Adaptive, in retrospect – I sometimes think it was too soon. I was really beat up, had surgeries all the time, was wearing splints and was wrapped up, but I learned so much. Adaptive really gave me confidence – I realized I can do all these things, maybe with adaptations (hence the name), but I can enjoy doing everything I once did.”

For instance, during this Adaptive trip, he already has surpassed his own expectations of himself by riding a regular bike. For the seven years since his accident, he always rode a recumbent bike, but on Day one he wanted to try and regular bike and was able to ride it.

Daniel also started doing motivational speaking and actually left firefighting and went back to being a full-time police officer. “I was worried if I could gain the confidence of my colleagues and community. Could I hold a gun, run, keep people safe? But I passed the academy with flying colors and qualified with all the physical aspects.”

He has learned many valuable lessons during his time in 2017 and now. “For the longest time I had a grudge against Mother Nature for taking away the lives of my buddies and almost ending my life. I loved the outdoors and now I had a fear of going into the woods. But this Adaptive experience has been a way to reconnect with Mother Nature. This trip teaches you to overcome your fears.”

Daniel added that this trip is more than just re-learning a skill but has given him perspective and outlook that has made him wise beyond his years. “Sometimes you need to lose something to realize how much you need it. You hear about people at the end of their life regretting that trip they did not take or something they never said or did. I learned to take every opportunity given and embrace life. Live your life to the fullest and be grateful for every day you are given.”